Wow, who knew a faggot could be this BASED?

Say what you will about faggots, but one thing that’s for sure is that they have an eye for aesthetics.

That’s why so many of them are home decorators and whatnot.

And if there’s one thing that is aesthetically unpleasant, it’s half-nigger babies.

Finally, one faggot has mustered the courage to buck political correctness and come out and state the obvious.

Perez Hilton has caused a stir online after he claimed Kylie Jenner should have an abortion.

It comes after rumours that Kylie, 20, is four months pregnant with boyfriend Travis Scott’s baby .

Perez took to his YouTube channel to rant about the apparent pregnancy, before claiming that the relationship won’t last.

He said: “Ring the alarm! Oh my god I needed to get on here and let you know Kylie Jenner is 99% pregnant!”

He then gave a slow clap and added: “She knows how to work it!

“She is the new Kim Kardashian! Kylie Jenner has just one upped everyone.”

He added: “I love life, I love babies, but if I was Kris Jenner I’d tell her to get an abortion.“

It seems the days of holding back are coming to an end.

It’s time to just tell it like it is.

This meme says it all:

Bobby no. Just no. Gross.

At this rate, as long as Perez repents for all the dicksucking, he may actually be spared the oven on the day of reckoning.

God createth abortion so thou may riddeth the world of mongrel abominations.

Dr. Duke read his statement on the issue,  which points out that not just our founding fathers,  but Abraham Lincoln,  the destroyer of the Confederacy,  were white nationalists.

Of course, why should the whites who founded this country as a country for whites be condemned  while not white countries around the world  (to say nothing of Israel)  are run for the benefit of their own dominant ethnic group?

Mark Collett  joined the show and made it clear that the problems faced by Americans are shared by Europeans, who are in the process of losing the countries their ancestors have lived in since prehistoric times.

Please keep us on the air and on-line.

This is an entertaining and informative show that you will want to spread widely.

Go ahead and try to name another ethnic group that is constantly probing global populations to determine how many people hate them.

More than a quarter of British people hold at least one anti-Semitic view, according to a study of attitudes to Jewish people.

The Institute for Jewish Policy Research said the finding came from the largest and most detailed survey of attitudes towards Jews and Israel ever conducted in Britain.

But it said the study did not mean that British people were anti-Semitic.

Researchers also found a correlation in anti-Jewish and anti-Israel attitudes.

But when questioned about whether they agreed with a number of statements, including “Jews think they are better than other people”, and “Jews exploit holocaust victimhood for their own purposes”, 30% agreed with at least one statement.

Despite this, the researchers said they found that levels of anti-Semitism in Great Britain were among the lowest in the world.

A spokesman for the Community Security Trust, which has recorded high levels anti-Semitic crime, said: “We believe the new findings, data and nuance in this study will help us to work even more effectively with partners inside and outside the Jewish community to tackle this problem.”

The report said about 70% of the population of Britain had a favourable opinion of Jews and did not hold any anti-Semitic ideas or views.

I for one am not the least bit ashamed to admit that I hate the Jews.  Furthermore, I am fixated with doing everything in my power to ensure that more people hate the Jews.

Making people hate the Jews consists of a single activity: showing them the behavior of the Jews.

For instance:  is not polling people to see how much they hate you just a really bizarre, sick thing to do?    Monitoring people’s views of you indicates that you are marketing yourself  which, if you are a race rather than a brand, would tend to indicate that you are up to something.

Either that, or are you are just a paranoid neurotic.

Neither being sneaky scam artists or paranoid neurotics is popular among the public, as a general rule.

Everything Jews do is disgusting. 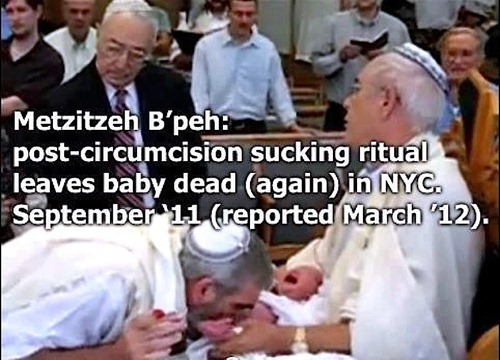 Still, the main reason people hate them is that they control everything in Western countries.

They also hate them because they invented the following things:

If you’re looking for reasons to hate Jews,  it’s unlikely you’re going to come up short. 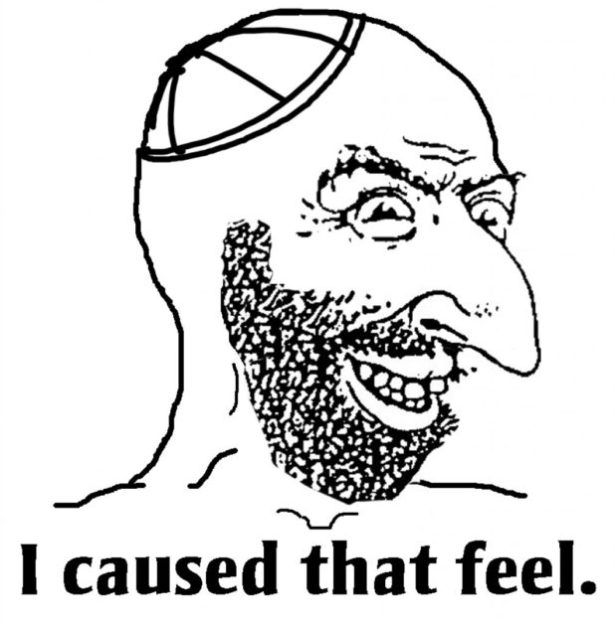 After having said “nigger” on a livestream, PewDiePie took the opportunity of being attacked by the filthy  kike media to release a parody video of an apology video, brutally mocking the sort of cucks who apologize for things.

In the scathing parody apology, you can clearly see that the video is explicitly designed to be as over-da-top and silly as possible, a directed attack on the losers who do things like say “nigger” in a livestream and then apologize for it.

This is basically funnier than just being like, “yeah, I hate niggers   –  so what, bitch?” because some of the media will think this fake apology is real and attack him for attempting to give a real apology.

Soon, PewDiePie will realize that there is nothing left to lose, and he has to go full-on.

He’s going to get kicked off of YouTube eventually either way  –  so he might as well pull the whole structure down on the way out.

In a related development, we are 24 hours out from  the release of the final proof  that fatty fat fat Heather Heyer did not get hit  by a car, and instead just fell over and died of a heart attack because she was so fat.

Unlike PewDiePie’s  fake parody apology, the lumbering slob  Susan Bro, fat mama of fat Heather, needs to issue a real apology for hoaxing that her daughter’s death on someone’s fault other than her own.  If she wants to go on a crusade, she should go on a crusade against the FDA for refusing to regulate trans fats and high fructose corn syrup.

If Bro does not apologize soon to white people and specific to James Fields  –  who she has wrongly blamed for  “murder” –  I am going to organize a protest in front of her house.

In fact, we’re not just doing a protest in front of her house  –  we’re going to camp out there,  like Occupy Wall Street. 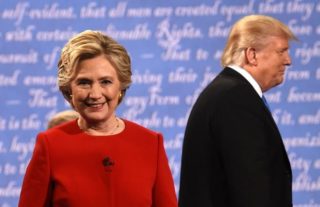 I’m surprised someone from the Democratic establishment hasn’t put some kind of pressure on Hillary to get her to go away.

It is so good for us to have her out there making these deranged scenes.

Not just good for the right, but specifically good for misogynists. Never again is anyone going to feel comfortable having a woman as the head of a political organization. They are just too incapable of handling difficult emotions.

Hillary Clinton has made little secret that she blames lots and lots of things not named Hillary Clinton for her 2016 loss. And amid a publicity tour for her just-released book — in which she re-litigates many of them — she just made her most serious claim to date. USA Today’s Susan Page, in an interview published late Monday night, asked Clinton whether she thought Trump associates colluded with Russia. And Clinton broke with many in her party by offering a pretty unvarnished answer in the affirmative.
“There certainly was communication, and there certainly was an understanding of some sort,” Clinton says at first, choosing her words carefully.
Page writes that she pressed further, asking directly about whether Trump associates colluded with Russia.
“I’m convinced of it,” Clinton said.
As is often the case with Clinton, she seemed to want to not-quite-say what she was actually saying. She talked about Trump’s ties to Russian money and the fact that Vladimir Putin wanted Trump to win. She talked about how those close to Trump “worked really hard to hide their connections with Russians.” She even punctuated all of this by saying, “I happen to believe in the rule of law and believe in evidence, so I’m not going to go off and make all kinds of outrageous claims.”
But that is a significant claim, and a bolder one than most Democrats have made thus far about collusion.

Because nothing could ever be her fault.

That is the mind of a woman. It is a woman’s natural state:  disbelief in the possibility that she could ever be wrong about anything.

Women also do not have fact-based thought-structures, so confrontation with facts does not have an effect on their perception of reality.

These reasons among many other reasons is why no one – ever in the entire arch of human history – ever thought it was a good idea for a woman to rule anything.

As she goes nuts humiliating herself in public, the public is becoming increasingly disgusted and disillusioned with her.

61% Say It’s Time for Hillary Clinton To Retire Hillary Clinton is back today with a new book, “What Happened,” to further explain why Donald Trump is president instead of her. But most voters still don’t buy her excuses and think it’s time for her to step off the national stage.
The survey of 1,000 Likely Voters was conducted on September 10-11, 2017 by Rasmussen Reports. The margin of sampling error is +/- 3 percentage points with a 95% level of confidence.

And those would probably mostly be Democrats.

I certainly don’t want her to retire.

I want her to keep doing exactly what she’s doing.

And I think I am going to buy the book.  I was conflicted on it. Because I’m really interested to see what it says, but then I was like “I’m not giving this bitch my money.”

But THEN I was like,  “well, actually, if the book sells well that will keep her on the national stage longer, so by contributing to the book’s sales, I’m actually helping further destroy the Democrat party.”

I went ahead and ordered it. What we really need to do is get Chelsea in the Senate or as Mayor of New York or something.
We need to keep the Clintons as the face of the Democrat party.